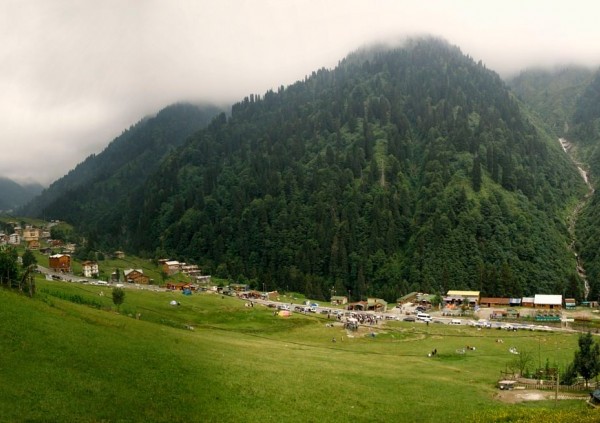 Ayder Plateau is approximately 69 kilometers away from Rize. It lies at an altitude of 1,350 meters, 17 kilometers southeast of Çamlıhemşin district.
Aydemer Plateau boasts magnificent nature with plenty of oxygen offering fresh air to asthmatic patients. It is fully covered with spruce and beech forests. It was declared a tourism center in 1987 and accepted as a national park in 1994.
It is the first stop of mountaineers who come to climb Kaçkar Mountain.
What will you see when you arrive at Ayder Plateau?
Fırtına Vadisi (Storm Valley) with magnificent nature that evokes your admiration with its beauty.
A landscape consisting of a stream flowing in a narrow and deep valley, small water resources joining it from every side, thousands of kinds of trees, and colorful flowers. Arch bridges built on the stream and small waterfalls flowing from the slopes
Hills and slopes with houses displaying different architectural styles of the Black Sea region and nostalgic cable cars.
Also, traditional Hemşin Houses and Zil Kalesi (Bell Castle) can be among the historical places you can visit. Polakcur Plateau, 5.5 kilometers from Ayder Plateau, Avusor Plateau first on the right on your way to Kavrun, Kavrun Plateau itself as Rize’s largest plateau, and Kaçkar Mountains National Park are among natural beauties you can see.
Ayder Plateau also includes Ayder Thermal Springs, one of the special thermal springs in our country. Emerging from a depth of 260 meters, the 50-°C thermal water is good for many diseases, especially rheumatism and arthritis.

Ayder Plateau is usually preferred by those who want a peaceful and quiet holiday. Hotels generally offer services every season because Ayder Plateau offers a different beauty in every one of them.

Ayder Plateau has a rich culinary culture alongside its natural beauties. One needs to definitely taste poached anchovy, anchovy balls, muhlama and squash soup, some of the most exclusive delicacies of the Black Sea.